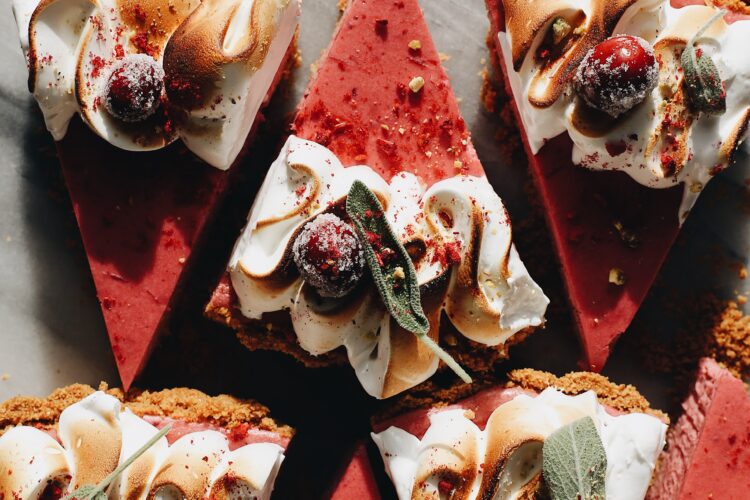 This cranberry cheesecake with toasted meringue has got to be my new favorite holiday centerpiece bake ever! Not only is it an absolute stunner, but it tastes so so good! Creamy sweetness meets the sharp festive flavors of the cranberry! I always love pairing tangy flavors with sweet bakes. All the flavors balance each other out so perfectly!

It may look impressive, but it’s actually very easy to make! This cheesecake is baked in a 9-inch tart pan and is not a full, super thick cheesecake. This means that it bakes and cools A LOT faster and doesn’t need a water bath to bake! Save this Cranberry Cheesecake with Toasted Meringue recipe for your next holiday gathering!

Make ahead of time

Cranberry Puree: This cranberry puree does take a couple steps, so I like to prep it the night before. It can be made and chilled in the fridge for up to 4 days before using.

Baked Cheesecake: Cheesecake is one of my favorite desserts to make for parties and gatherings. Yes, it always tastes amazing and it’s always such a crowd pleaser. But one of the reasons I love making it is because it can be whipped up way in advance and sit in the fridge before serving! This baked cheesecake can be chilled in the fridge up to 3 days before serving. It could probably go a little longer, but it won’t be its freshest.

*Meringue CANNOT be made ahead of time, unfortunately. I whip up the easy meringue recipe right before torching and serving!

How to make Cranberry Cheesecake with Toasted Meringue

Other recipes you might like!
Pumpkin Cheesecake with Gingersnap Crust and Toasted Meringue
Blood Orange Cheesecake Tart
Strawberry Cheesecake Pie

Creamy, sweet, and tart flavors do a wonderful balancing act in this beautiful cheesecake tart, perfect for all your holiday gatherings!