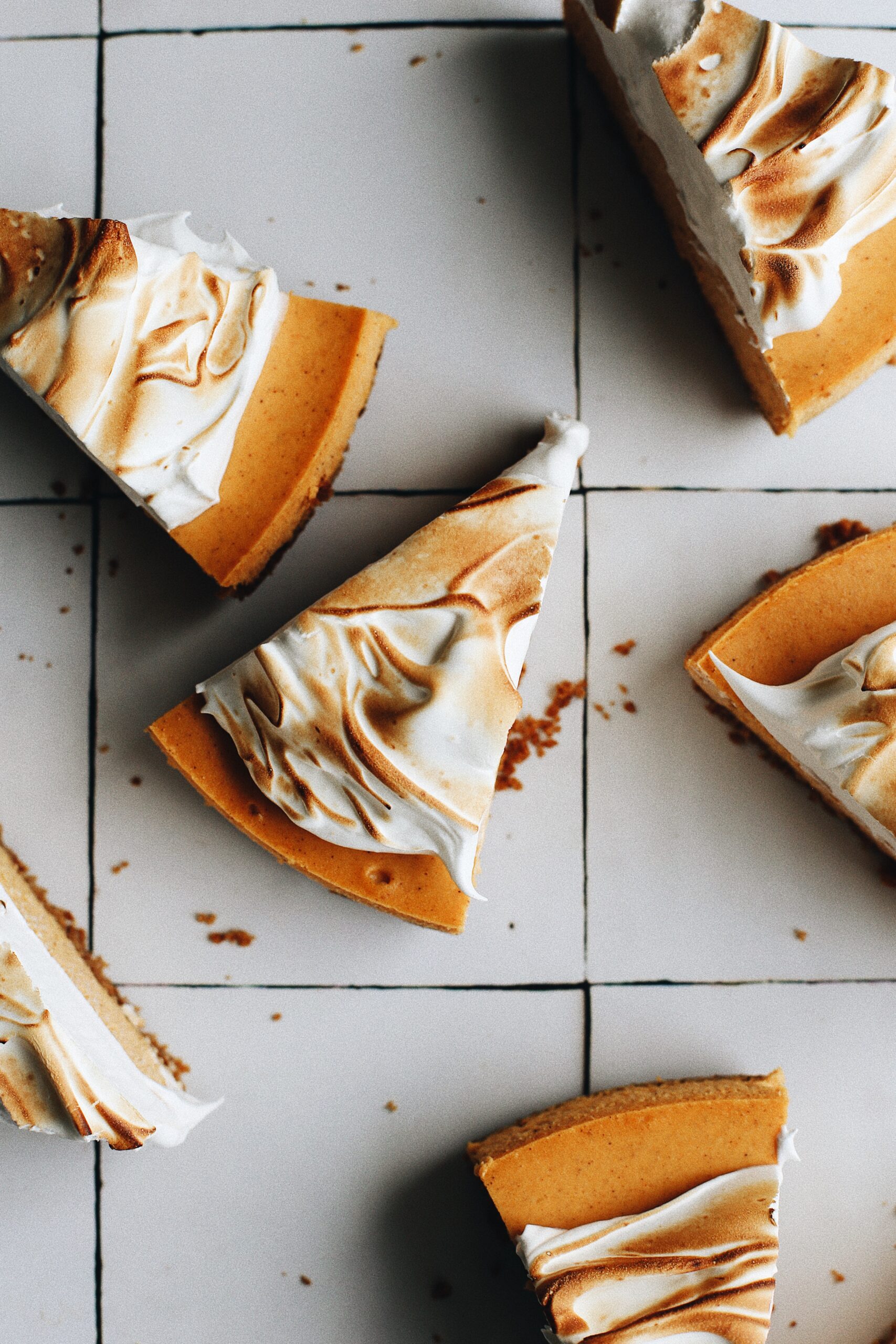 this beautiful center-piece worthy cake is creamy and rich, silky smooth and full of pumpkin and spice, and is surprisingly easy to make. the pumpkin cheesecake with gingersnap crust and toasted meringue is a show stopper that’s perfect for all the holiday dinners and parties coming up! this recipe comes from kelsey siemens‘ beautiful cookbook, the farmer’s daughter bakes. kelsey’s cookbook came out last fall and was the number one book on my wish list– and for good reason too! kelsey not only developed and wrote every single recipe in her book, but she styled and photographed everything herself as well. the recipes are spread out and chaptered by the different seasons and the beautiful fruit and produce that capture that particular time of year. the book encapsulates a sense of whimsical magic that can only be found in nature– something i feel that mirrors kelsey’s own personality and character!

how to make this recipe

make the crust. every good cheesecake starts with a good crust. this recipe uses gingersnap cookies for the crust and it goes so well with the pumpkin and spice flavors in the cake! pulse the cookies in a food processor until we get fine cookie crumbs. then, combine this with melted butter and salt, and press it into the bottom of a springform pan before baking it for about 10 minutes.

make the pumpkin cheesecake filling. first, beat together cream cheese and sugar until it’s smooth. then, we add pumpkin puree, vanilla, flour, cinnamon, and all-spice. to that, we slowly beat in the eggs, one at a time. making sure to scrape the sides of the bowl as we go, we beat everything together until smooth, and that’s it! the filling is poured on top of the baked crust and baked at 260 degrees F for about an hour. kelsey is an absolute genius for this. baking with this low temp means NO WATER BATH! YAY! cool the cake in the turned off oven for about 20 minutes to prevent cracking. then we chill the cake in the fridge for several hours or overnight until we’re ready to serve!

make the meringue topping. meringue might seem intimidating if you’ve never made it before, but it’s extremely simple if you follow the steps closely. to the bowl of a stand mixer, whisk the egg whites and sugar together, set over a pot of simmering water to create a double boiler, and slowly heat and mix the egg whites until it reaches 160 degrees F, and is no longer grainy when you rub it between your fingers. with the whisk attachment on the stand mixer, whisk the egg whites, gradually increasing the speed, for about 7-10 minutes, until we end up with glossy, stiff peaks!

putting everything together. when the cake is completely chilled and we’re ready to serve, pile the meringue on top of the cake, spread it out a bit, and torch the surface until it’s nicely toasted and browned. to cut neat slice, use a warm dry knife and wipe off between every cut.

rich and creamy, silky and spicy, this pumpkin cheesecake is such a showstopper and surprisingly easy to make! plain cheesecake who?! this recipe comes from kelsey siemens' cookbook, the farmer's daughter bakes.