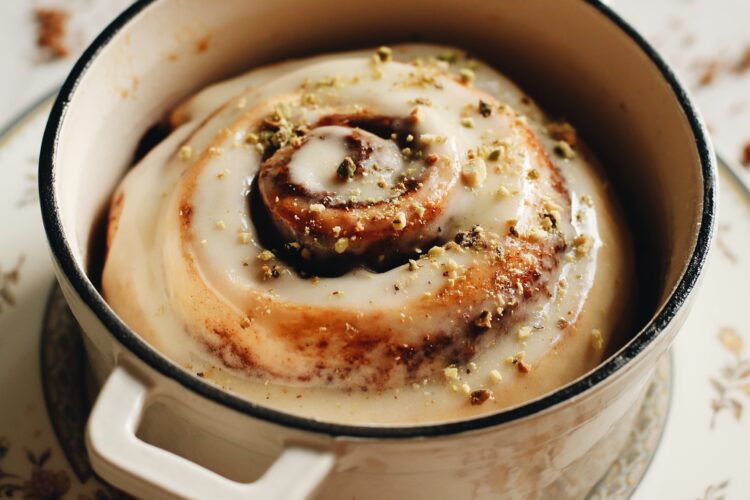 I created the Single Girl Milk Bread Cinnamon Roll for a few reasons. Mostly because I think it’s a fantastic idea; but honestly, it was definitely because I finally decided I needed to purchase the cutest little mini dutch oven from Target! I had no idea what I was going to be making in the dutch oven, but I just couldn’t leave the store without it! Thus, the Single Girl Milk Bread Cinnamon Roll was born!

Yes, I am a single girl (actually, perpetually so). And while I feel that it doesn’t define who I am, being perpetually single has become a huge part of me and has helped me to really know myself. I’ve grown to really love being by myself (tell me you’re an aquarius without telling me you’re an aquarius, amiright?!). Sometimes being alone means making plans for one, dining out for one, and also, cooking/baking for one. Sure, I could just make an entire batch of 12 cinnamon rolls if I’m craving them. Sometimes its super easy to find people to share them with. But sometimes, it’s not. The fresh warm rolls become not so fresh and warm, and they go waste!

With this recipe, you get one beautifully sized milk bread cinnamon roll. I know what you’re thinking; it’s too much work for just ONE cinnamon roll. But honestly, it’s not. It may take a little time and patience, but don’t all good things? Being single frees up your time a bit. I love the idea of slowing down and really putting your all into little projects. And if all projects were as yummy as this roll, I’d take ALL the time I needed!

What is Milk Bread

This single milk bread cinnamon roll is pretty much just an adjusted recipe from my original milk bread cinnamon rolls that makes a full batch of 12! It is so so delicious and both recipes use tangzhong. Tangzhong is very simply just flour and water cooked together until it becomes a bit of a paste. It’s added to the dough and this becomes milk bread. The result is fluffier, more tender, and much softer bread that stays that way for much longer than regular bread.

Not only is it absolutely simplistic, it takes barely any extra time at all to whip up and the results are always worth it!

Ever crave cinnamon rolls but you don't want to make an entire tray of them?! This is the perfect portion to satisfy all your ooey gooey fluffy cinnamon roll dreams!